Afghanistan, between a rock and a hard place

Velo Spirit » Afghanistan, between a rock and a hard place

Afghanistan, between a rock and a hard place

In June 2013, photographer Dan Milner is participating in a pioneering mountain bike trip in Afghanistan. Alongside Bike's magazine editor, Anthill Film cameramen, and Canadian pro mountain biker Matt Hunter, they reach the Wakhan Corridor from neighboring Tajikistan. After 4 days of overland travel they reach their starting point and start riding. Their quest for singletrack reveals the other side of Afghanistan.

WITH THE COURTESY OF

“His name means ‘soldier’,” says Yaar Mahahammad, our translator. Yaar is talking about Askarkhan, a 13 year-old boy who has been hefting rocks into the foundations of a new hut with the kind of ease that would put my own strength to shame. Despite his military-sounding name, Askarkhan’s clothes have no resemblance to a uniform, and he doesn’t need one. Here, at 4305 metres altitude amidst the swirls of a snowstorm in the Wakhan Corridor, Askarkhan is far from the war and troubles that have tragically become synonymous with his home country -Afghanistan. Here the best weapon for survival is resilience not a rifle. Resilience will see Askarkhan brave the short, eight-week summer of herding yaks and sheep high on the mountainsides. All in all, it’s probably the harshest place I have ever been, so why the hell are we trying to ride bikes here? 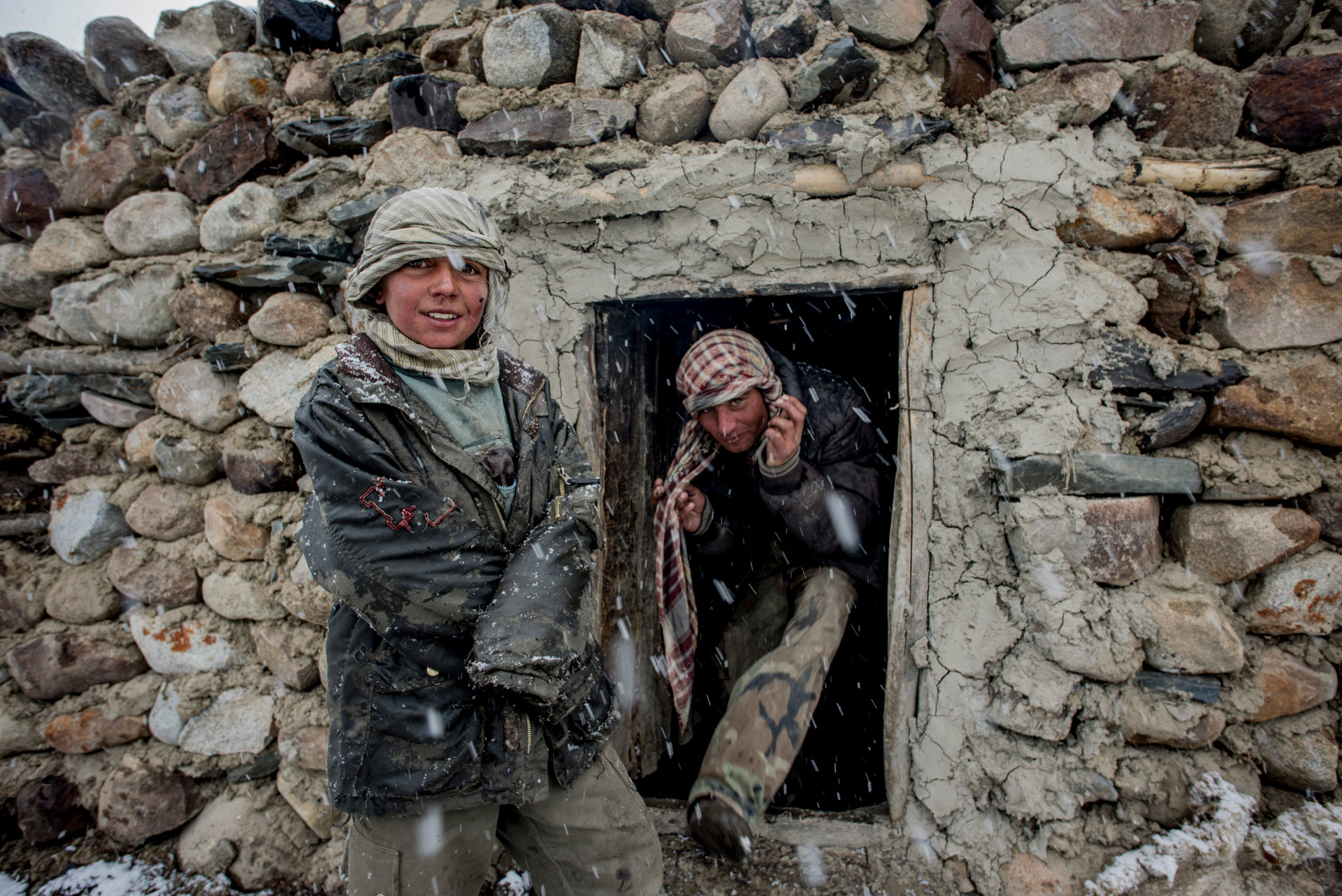 The snow buries our six bikes and tents alike. Above us, hidden in fog sits the 4809m Karabel pass, the second of three high passes we have to brave during our 12 day adventure ride through the Wakhan. The term ‘adventure’ seems to put such endeavours outside the normal remit for whinging; if the going gets tough then that’s just part of ‘adventure’. But if “hard-earned” is the price you pay for riding where no one has ever ridden before, then we’re paying handsomely in Afghanistan. There has been nothing easy about our trip so far, from the four-day, rough, overland approach from neighbouring Tajikistan, to the massive temperature swings that deliver 30C heat one day and snowstorms the next. It’s day five when we meet Askarkhan. We have seven more to go. I’m tired, my feet are wet and my hands numb.

Five days earlier we strike out from Sarhad, the village at the end of the only boulder-strewn, washed out jeep track into the Wakhan Corridor. It’s a road we travelled in Toyotas with bald tyres and broken windscreens, taking 14 hours to cover the final 150 Km of Afghan soil. After that it’s good to be on the bikes despite riding straight into a 600m climb. We leave behind us any semblance of vehicles, toilets or cell-phone coverage. For 12 days our tyres roll only on ancient trails chiselled into the dusty hillsides by centuries of determined pack animal traffic plying the Silk Route. 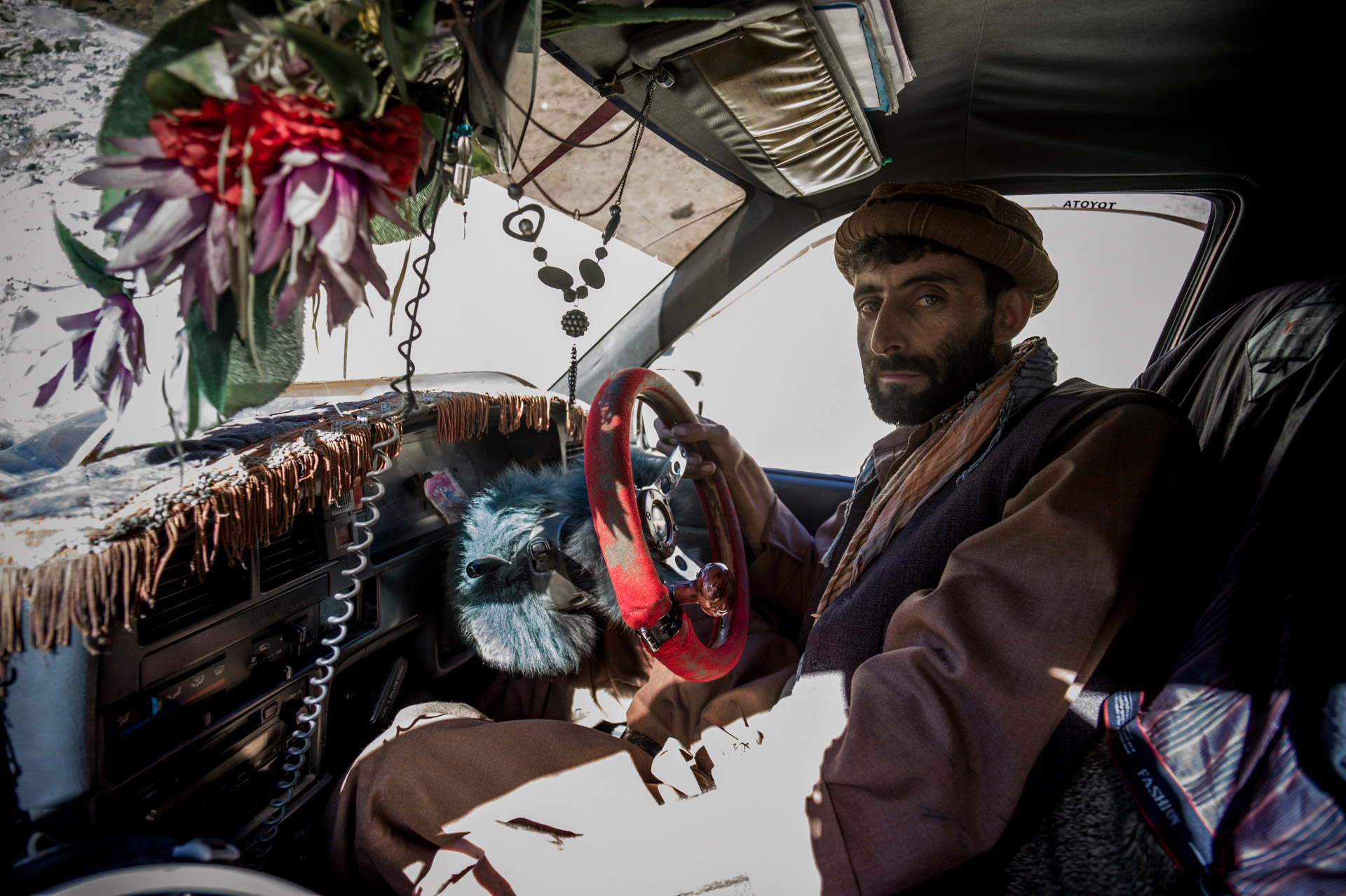 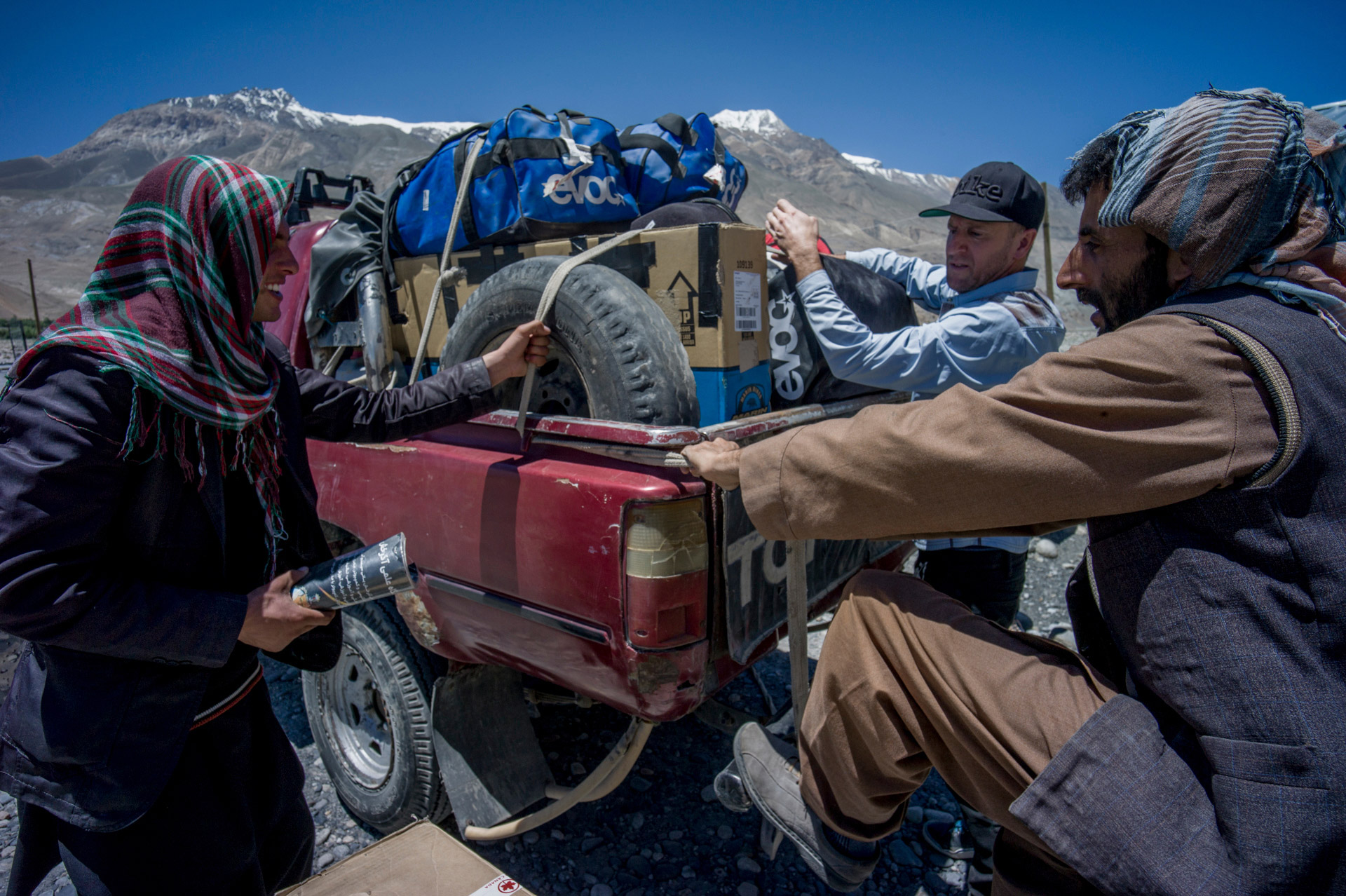 “So we have three possibilities,” explains Tom Bodkin about our route options, laying out a patchwork of old 1980’s Soviet maps on the grass. Tom runs adventure travel company Secret Compass and is the brains behind the whole expedition we’ve signed up for. As if adding items to a shopping list he methodically names several swollen rivers and snowy passes that could defeat our 250 km ride. 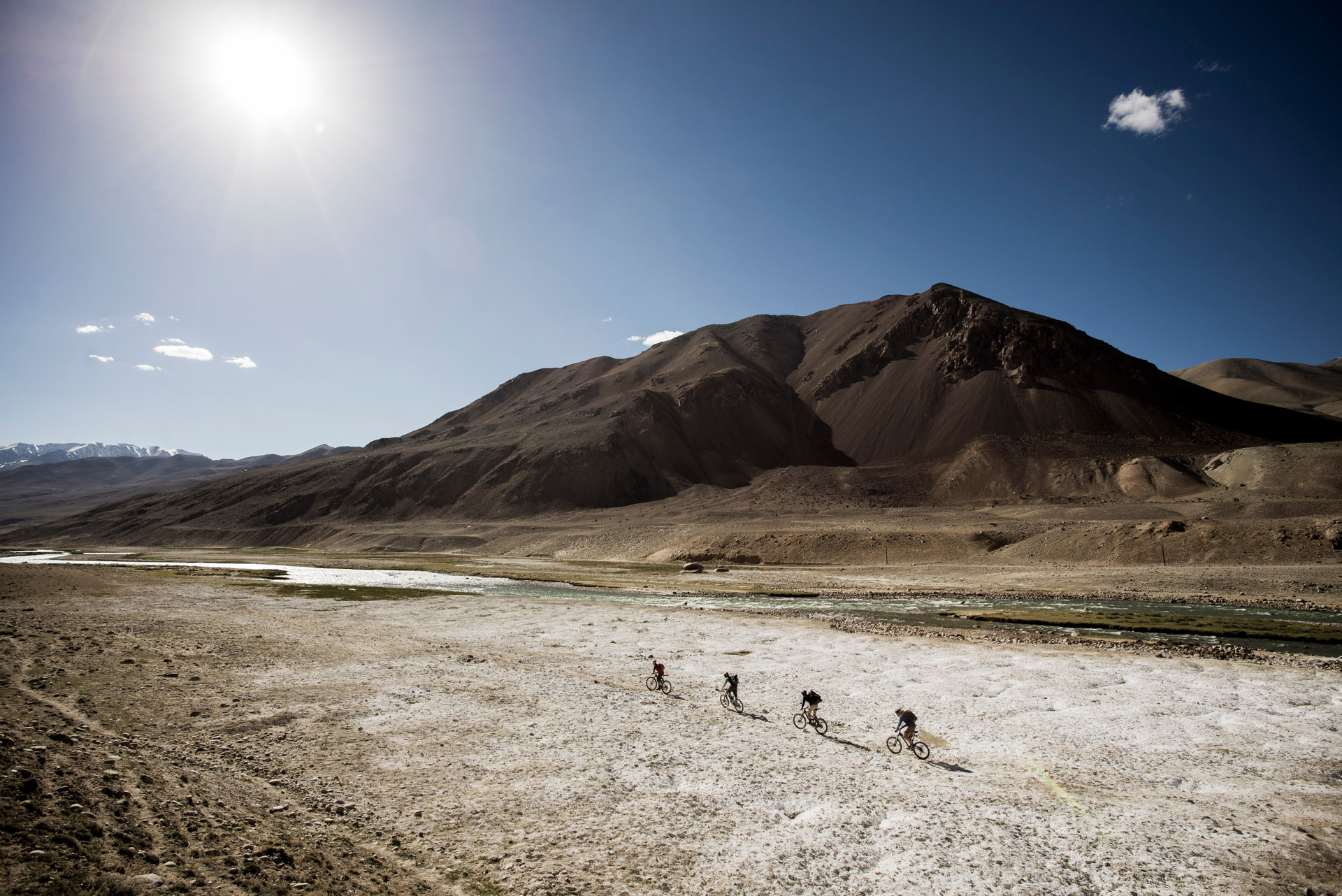 For all of the assembled mountain bikers, including pro-rider Matt Hunter, Anthill film cameramen CJ and Darcy and expedition-veteran Brice Minnigh, the lure of riding bikes here is not about kudos or dubious bar-talk bravery of ‘surviving Afghanistan’. It’s the enticement of the unknown, of what lies beyond the usual boundaries of daily routines. It’s the magnetic appeal of hard-earned singletrack rewards that has brought us to this unforgiving landscape. It’s true that no-one has ridden, pushed or carried bikes through here before, but the Wakhi people welcome about 100 trekking tourists each year, each safe in the knowledge that the Wakhan sits beyond Taliban and NATO interference.

We ride off-camber, loose, narrow trails, perched precariously above thundering rivers brown with meltwater silt. Each of us deals with the exposure factor differently, but the river crossings themselves become the single great leveller. At each river we stop, regroup and collectively plan a way across, and for good reason.  Every river is a raging torrent of ice-cold meltwater, formidably dark with silt. Carrying bikes becomes a game of nerves and balance and numb feet become the targets for bowling-ball rocks, rolled along the riverbed by an angry current. Meanwhile a wildly shouting Afghan support team beckons from the far bank, adding to the drama. And then we have to get the donkeys across.

We’d be going nowhere without this support and their pack animals. In this forgotten land, we become a valuable source of income for six locals, including Amin Bek our cook, Amin Ali his helper and Yaar Mahammad our translator. It’s clear Yar doesn’t understand much of what Tom tries to convey to our horsemen and cook, but without him we’d be felled. Finding an English speaker in this remote corner of the globe is nigh on impossible. When Tom put the word out, only three candidates showed up at the Tajik-Afghan border crossing of Ishkashim. One of them had travelled two days to pitch his service. 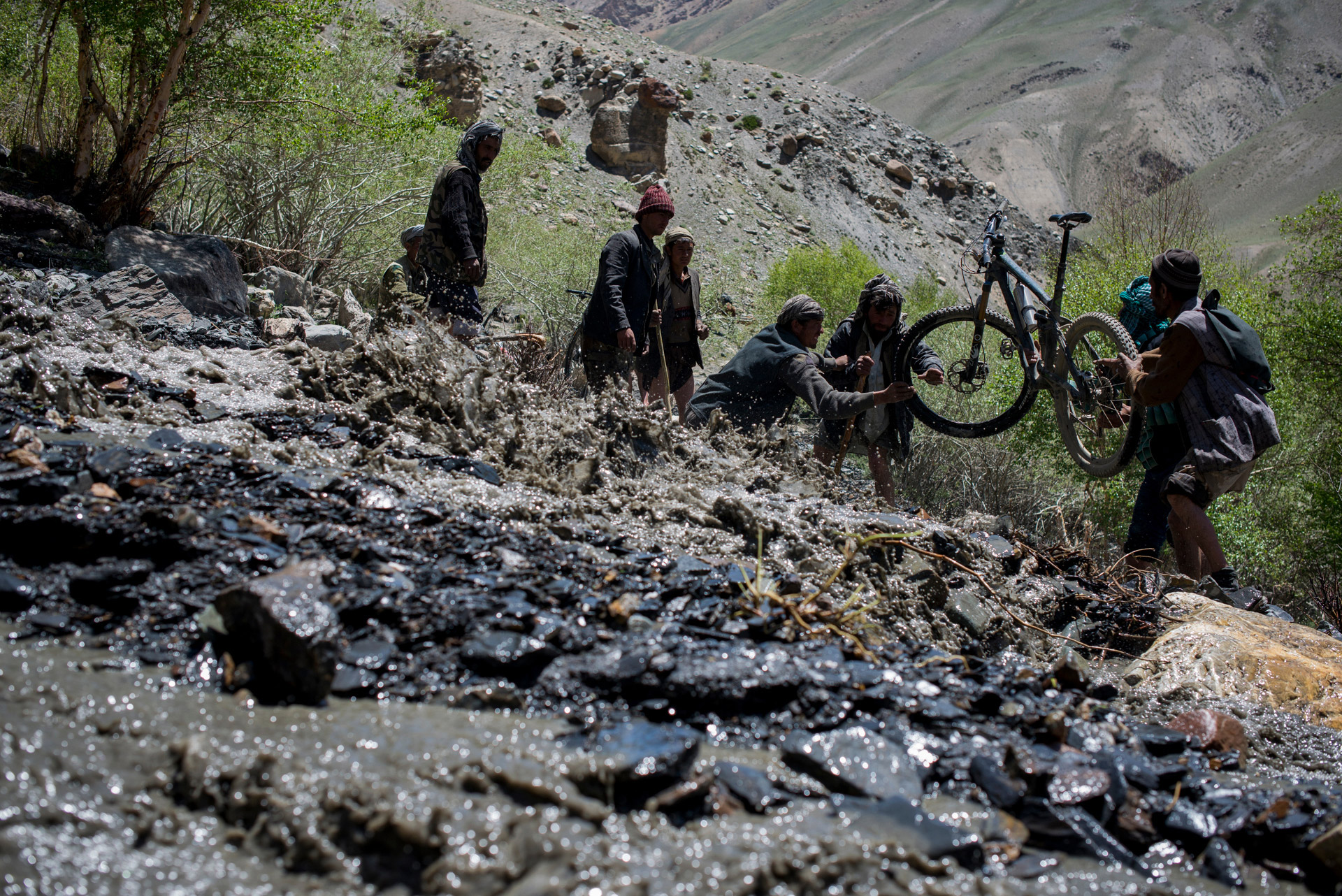 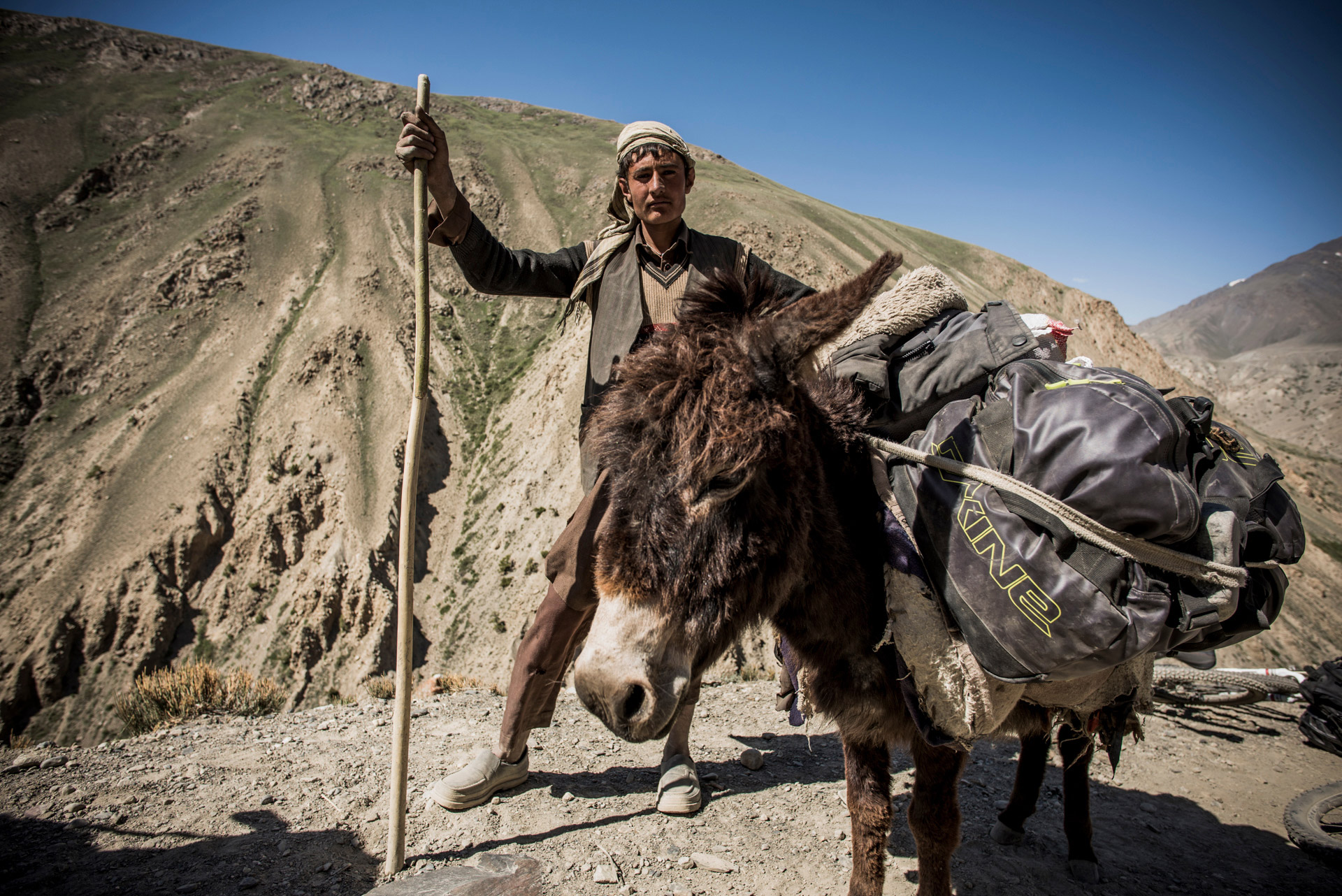 The distances we cover aren’t big by any standards but I’m thankful for that. Starting out at 3264m we rapidly climb to over 4200m and remain above 4000m for much of the trip. For the first three days we work our way up the side of the thundering Wakhan river, riding into the magnificent rolling hills of the Little Pamir in the shadow of the Hindu Kush. We follow a solitary horse trail up valleys and over passes. Spirits are high and group cameradery building. Later each of us will suffer a low point in the trip, when energy and morale is lacking. It hits me on day eight, during a 40 Km ride that starts with a morning of amazing singletrack but descends into a freezing slog across boggy ground into a headwind of swirling snow. When we stop for a break, I question our sanity. The group is silent. I get the feeling that others share my doubts, but no one wants to spoil the party. By the time we reach camp at dusk we will have been on the trail for 12 hours. 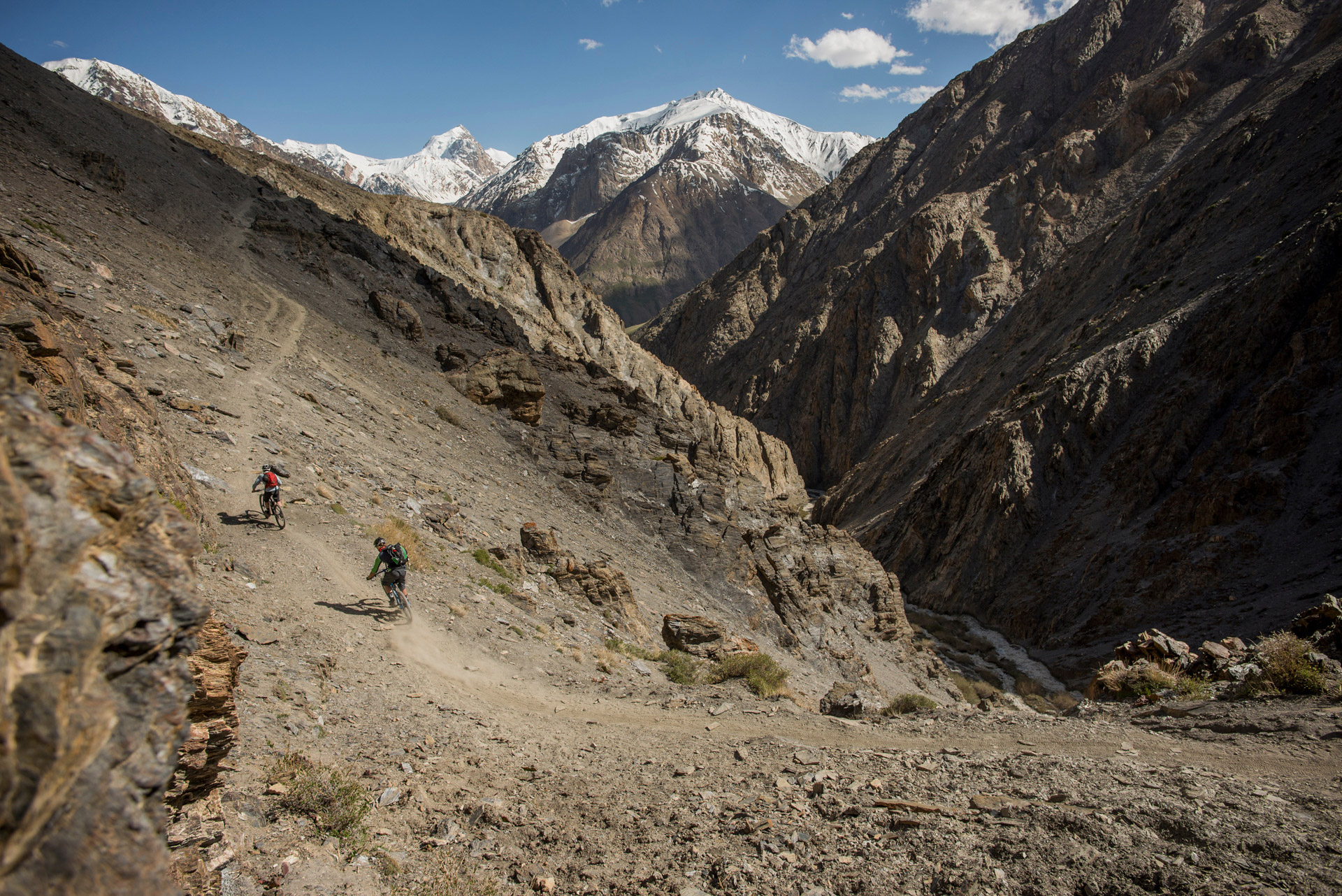 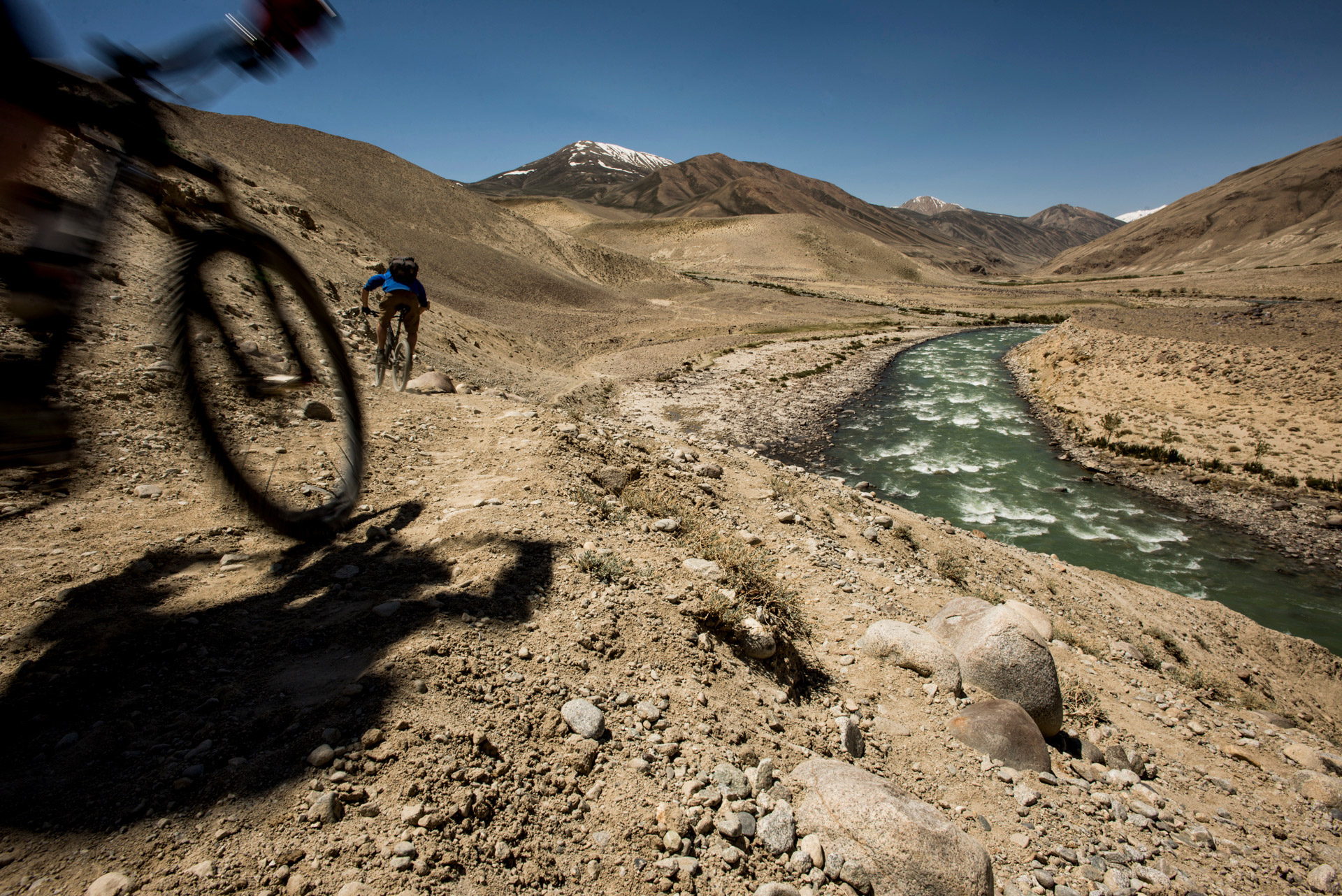 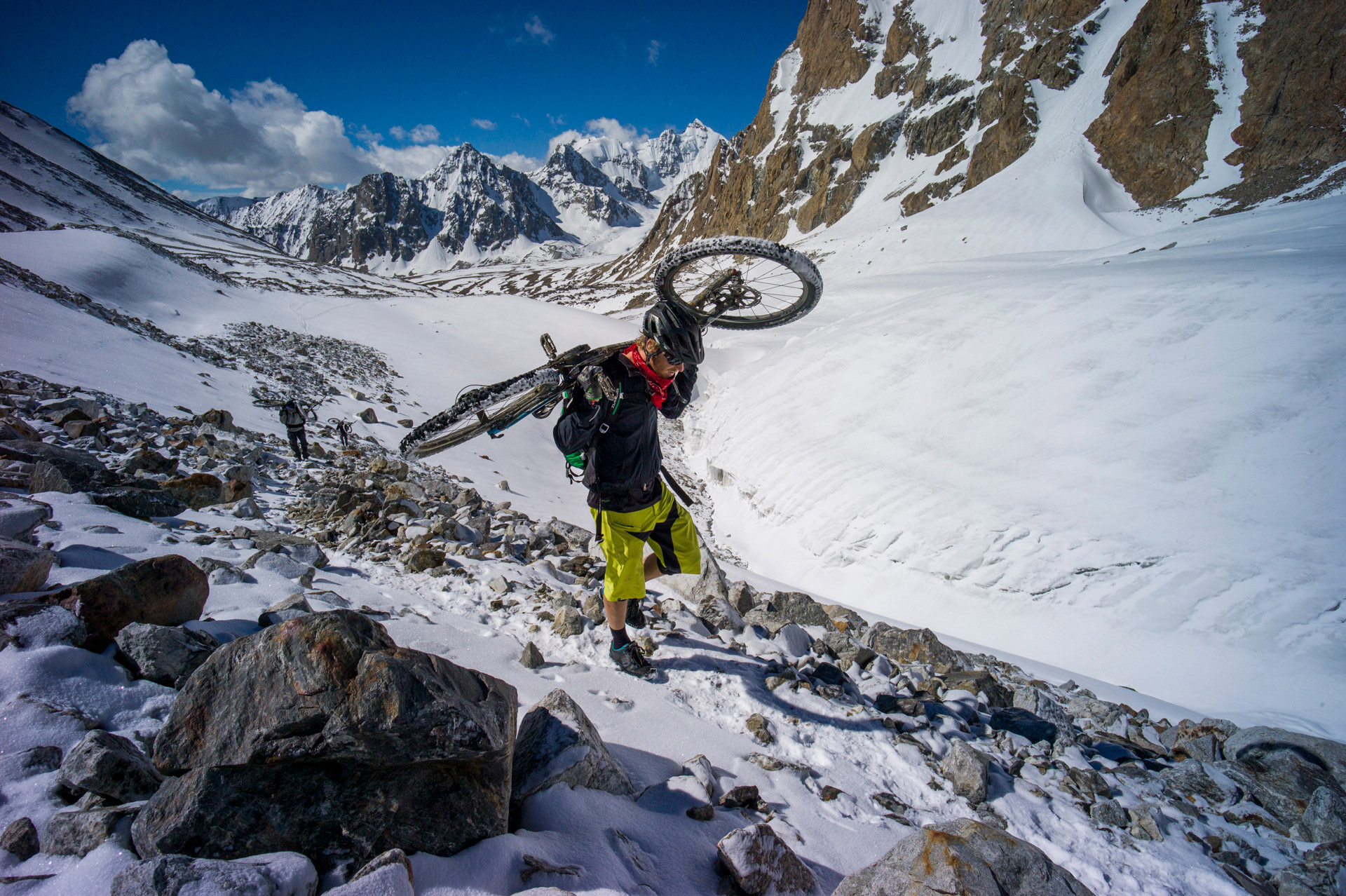 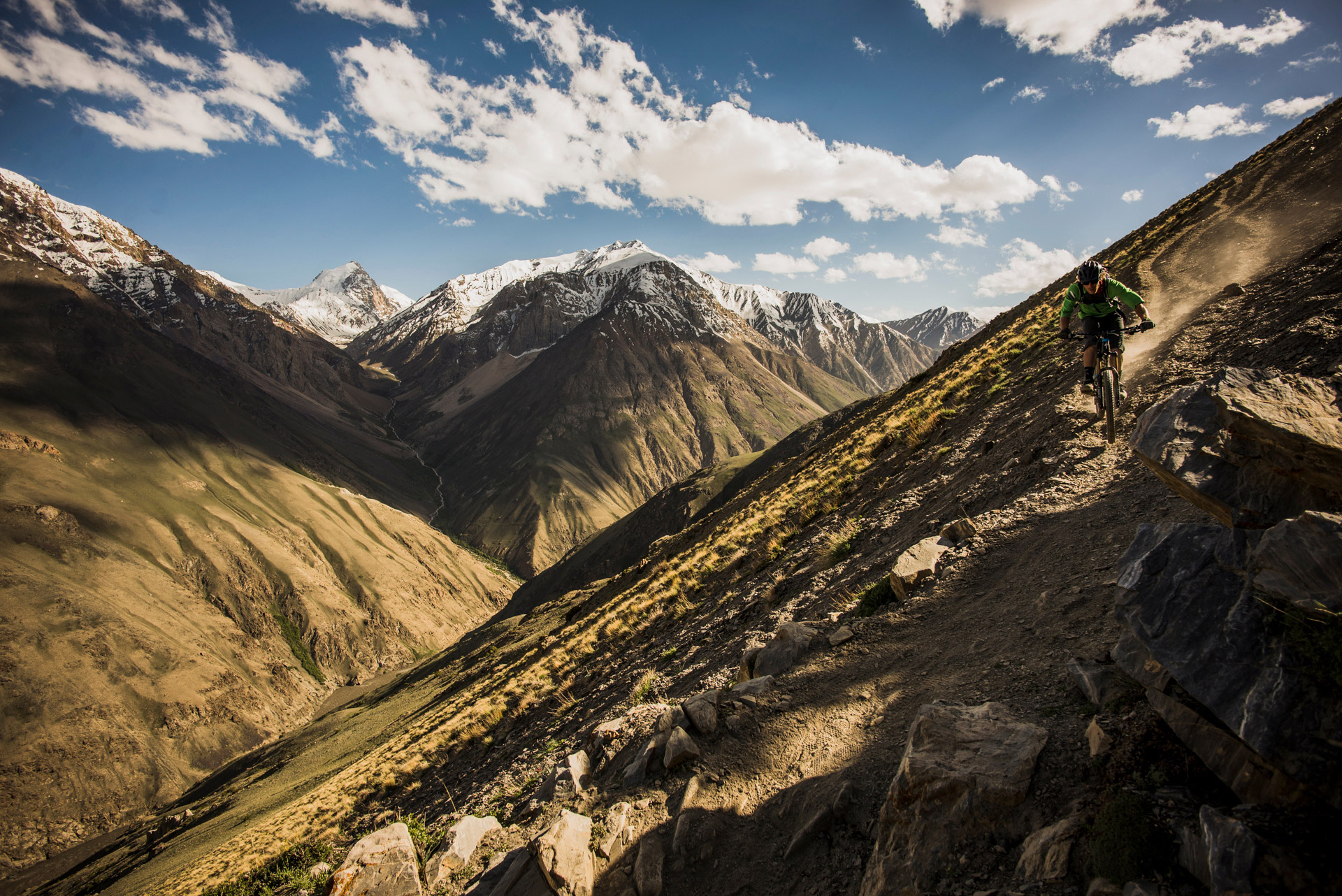 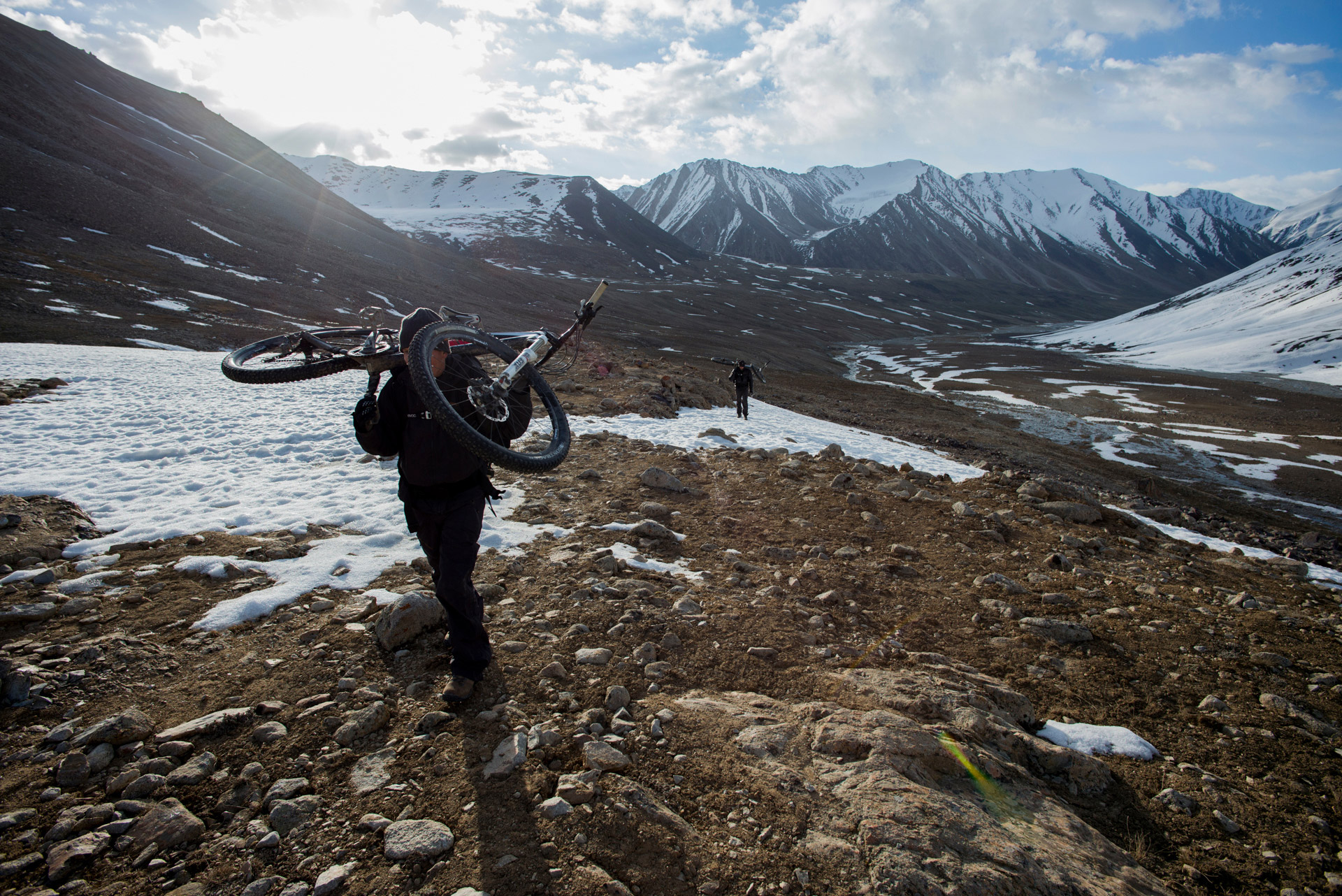 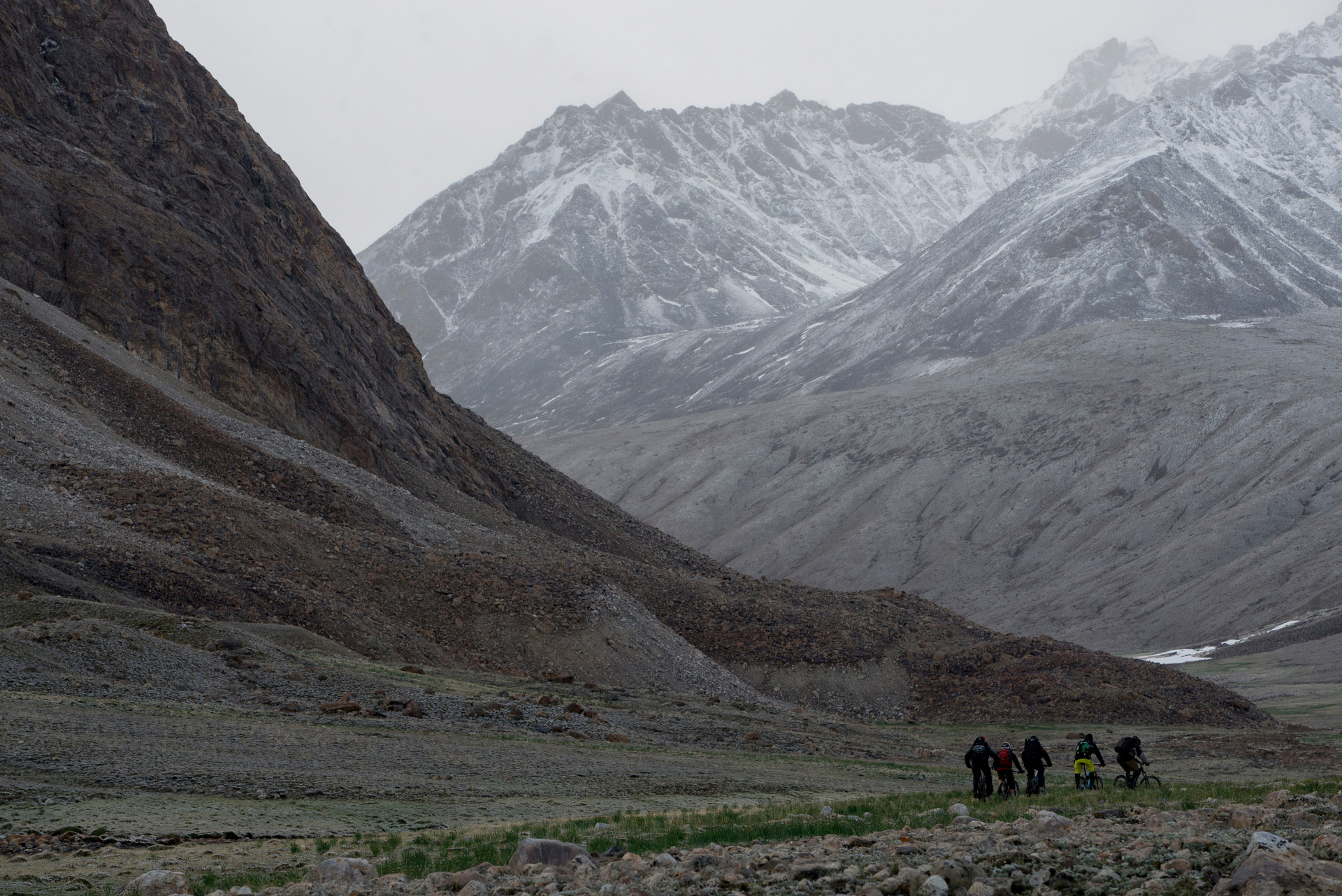 boulders etched with petroglyphs, sometimes squeezed into steep-sided river gorges. While there are no permanent villages in the Wakhan, we camp wherever there is a shepherd’s hut shelter for the Afghans, and when the snow starts blowing, we join them in these chimney-less shelters for as long as we can endure the thick, choking smoke of the yak dung cooking fire. Respiratory complaints are common here. Apart from our passion for bikes, we six westerners also share an appreciation and respect for the locals. None of us have met such a hardy, tough people. 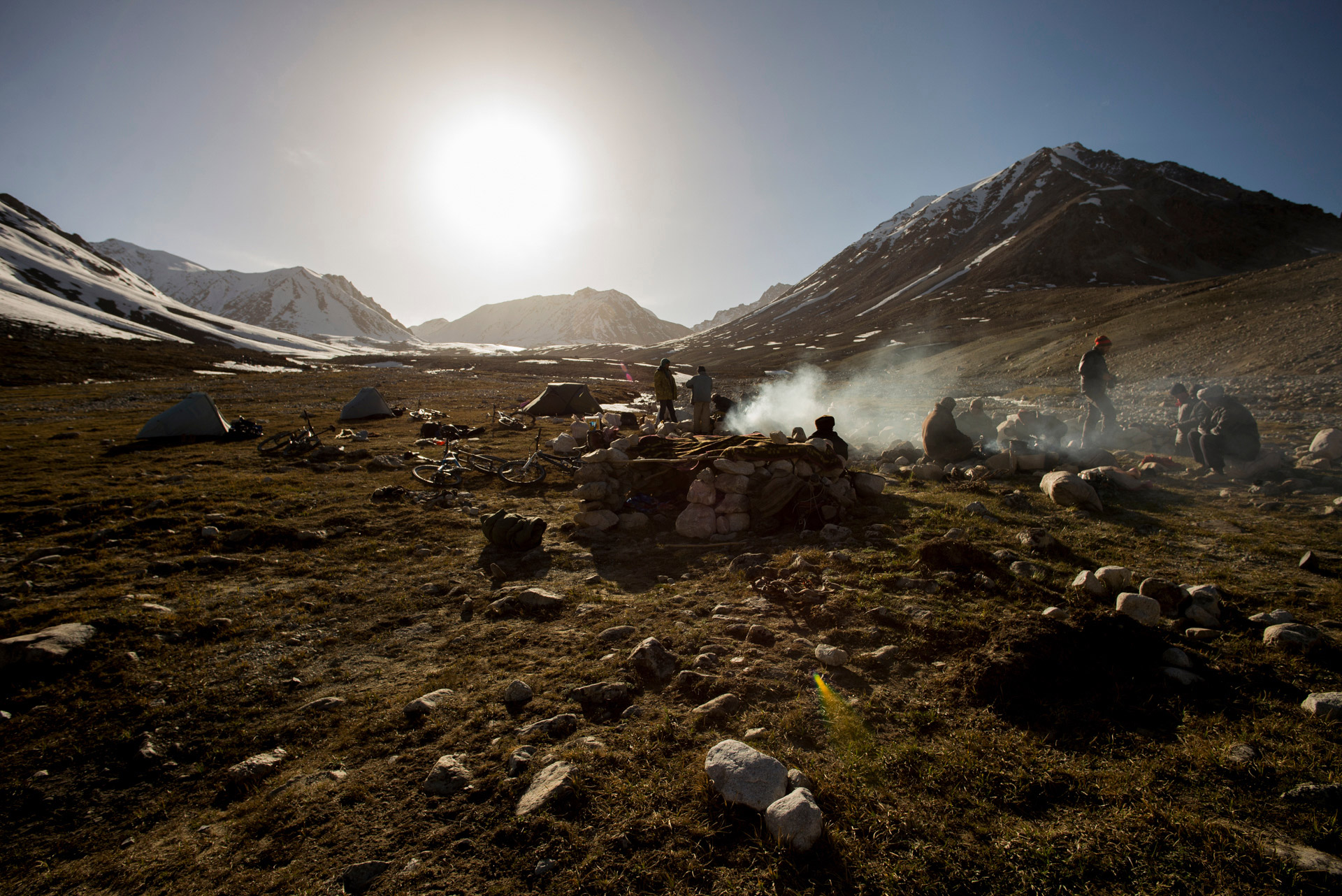 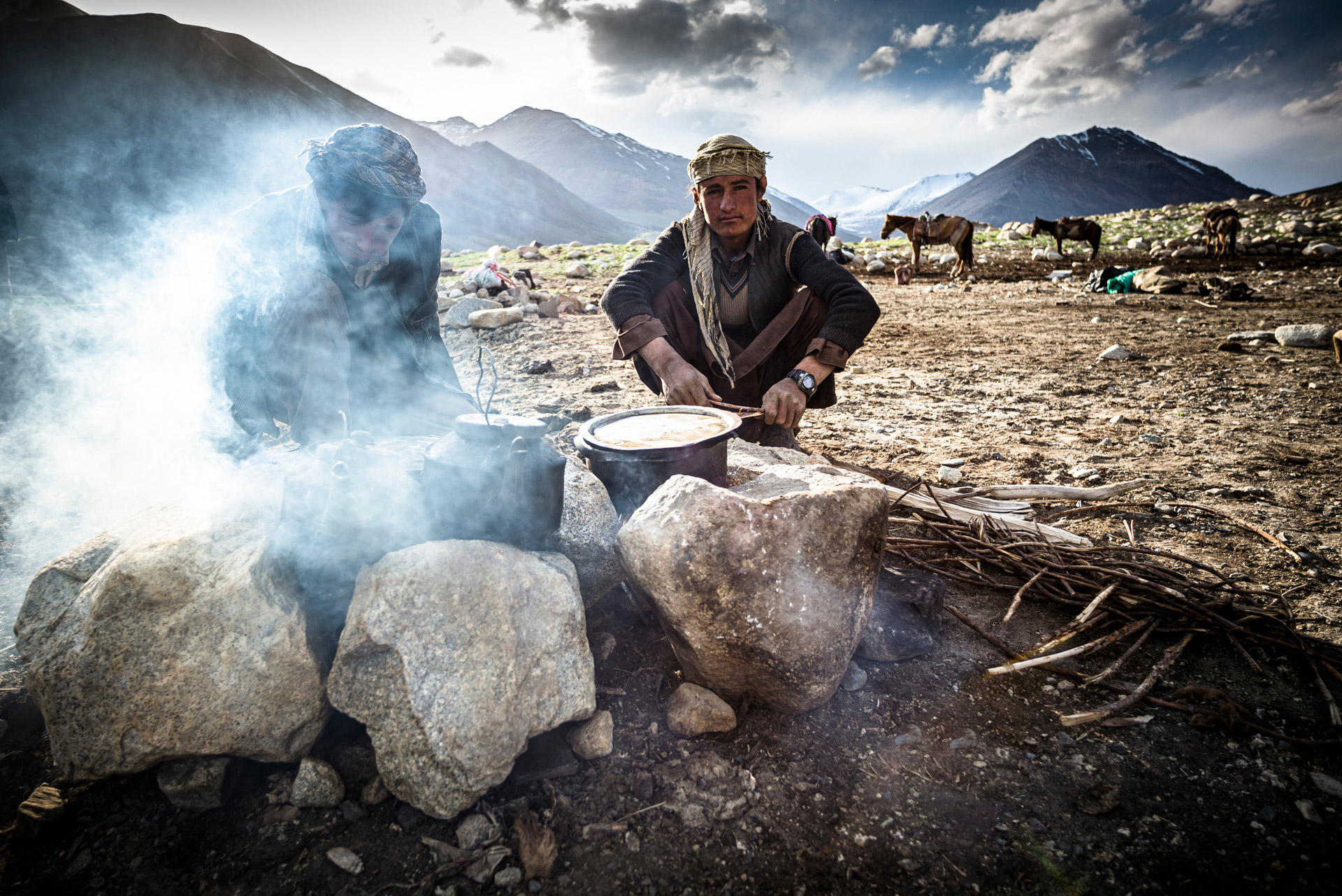 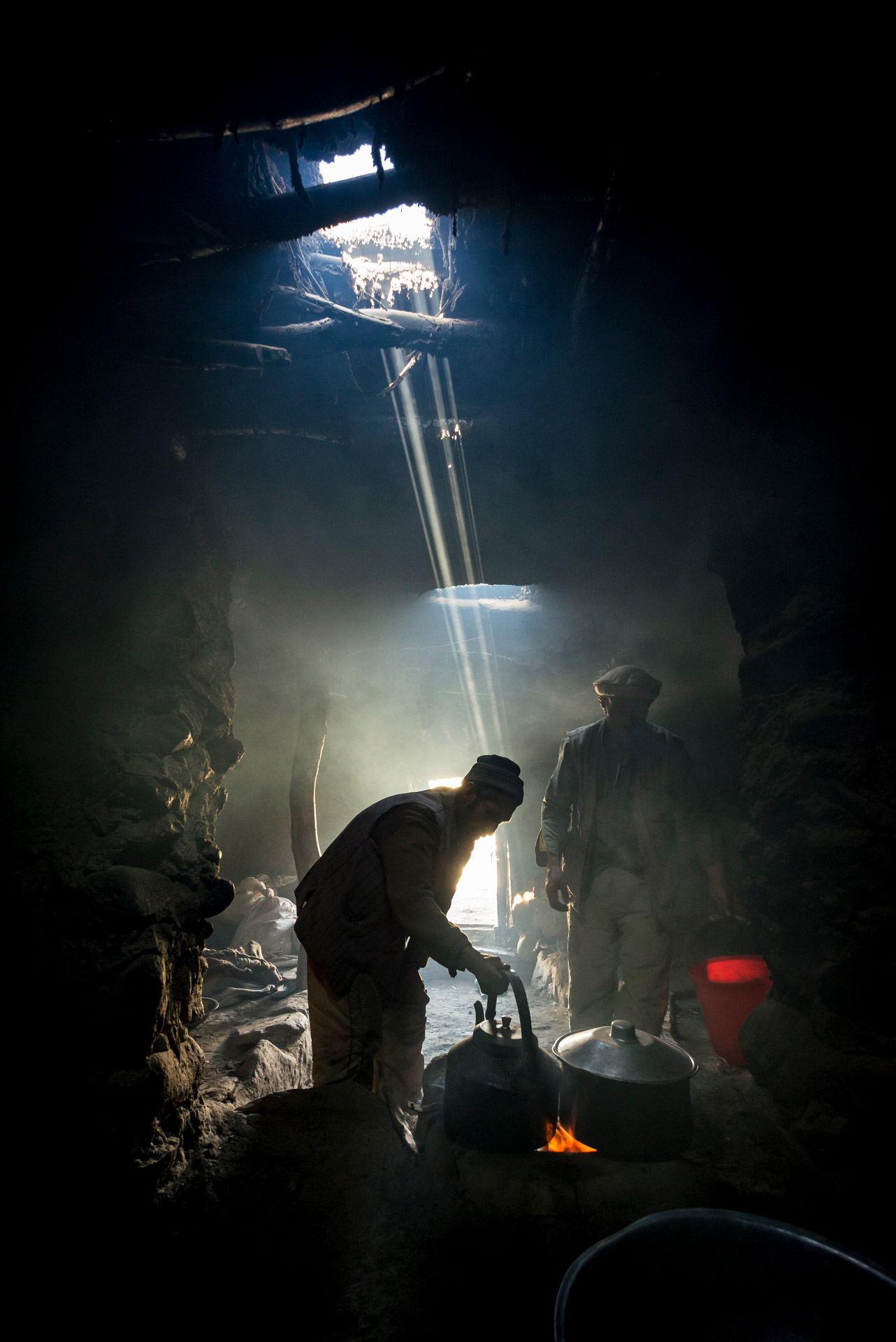 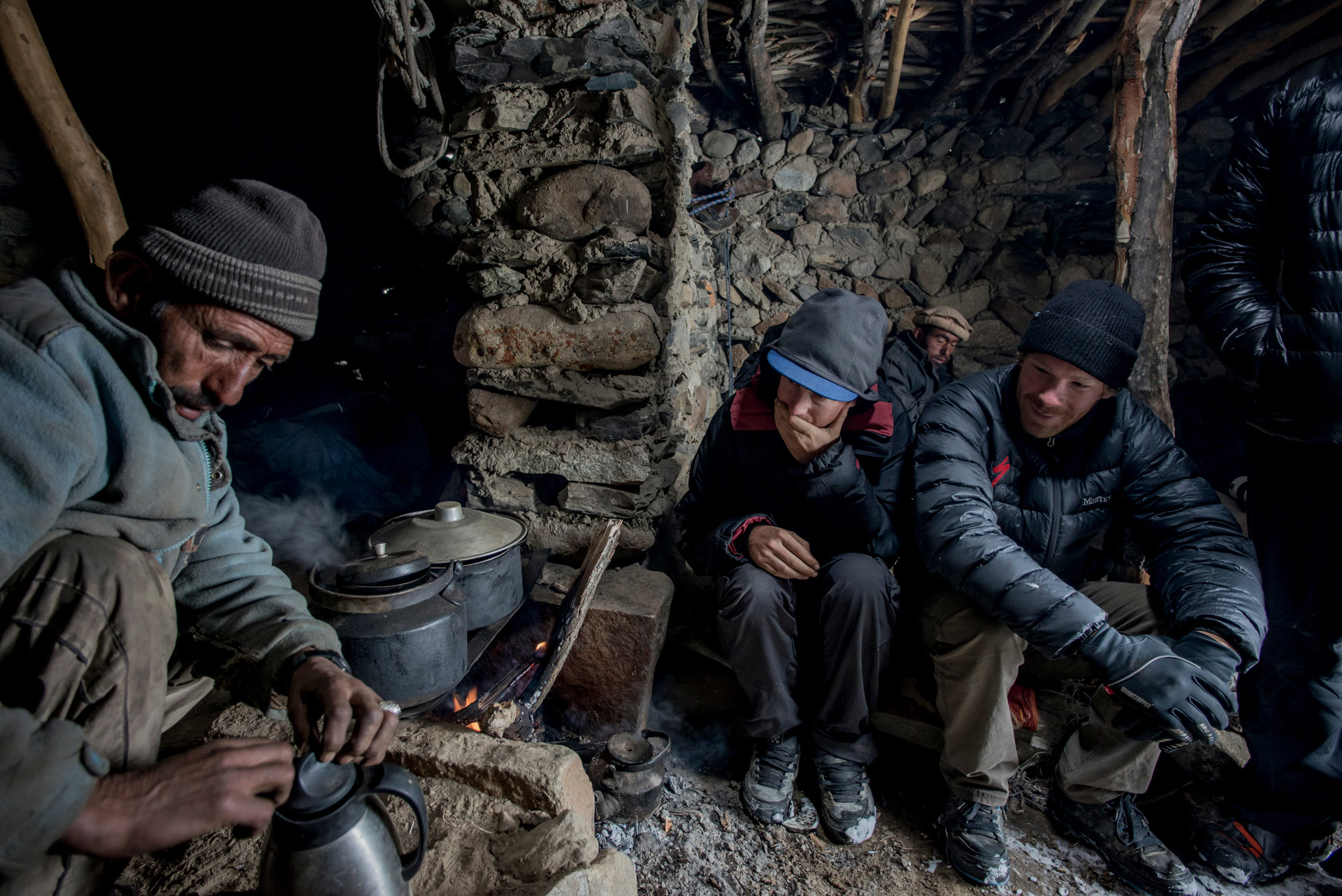 The high passes become our biggest obstacle. Higher than any peak of Europe they become a challenge for fitness and lung capacity alike. With a 4 am, sub-zero start each is a race against time, trying to cross before the snow softens. On the Karabel pass we lose the race; our horses flounder in the deep snow. We have crested the pass but further progress is impossible without risking losing an animal. We beat a retreat knowing that tomorrow we will have to go around instead to reach our staging post for the next pass.

We camp at 4400m beneath an enormous hanging glacier. It’s possibly the most spectacular camp spot I have ever seen, but I am too tired to truly appreciate it. Six hours later we are hiking icy scree again to reach the 4867m Showr Pass, the gateway to the Kyrgyz controlled Big Pamir mountains. The achievement is as much mental as physical. The descent is an eclectic mix of riding snow, mud and rocky singletrack, weaving between boulders and around bogs. The riding is as wild as our surroundings. 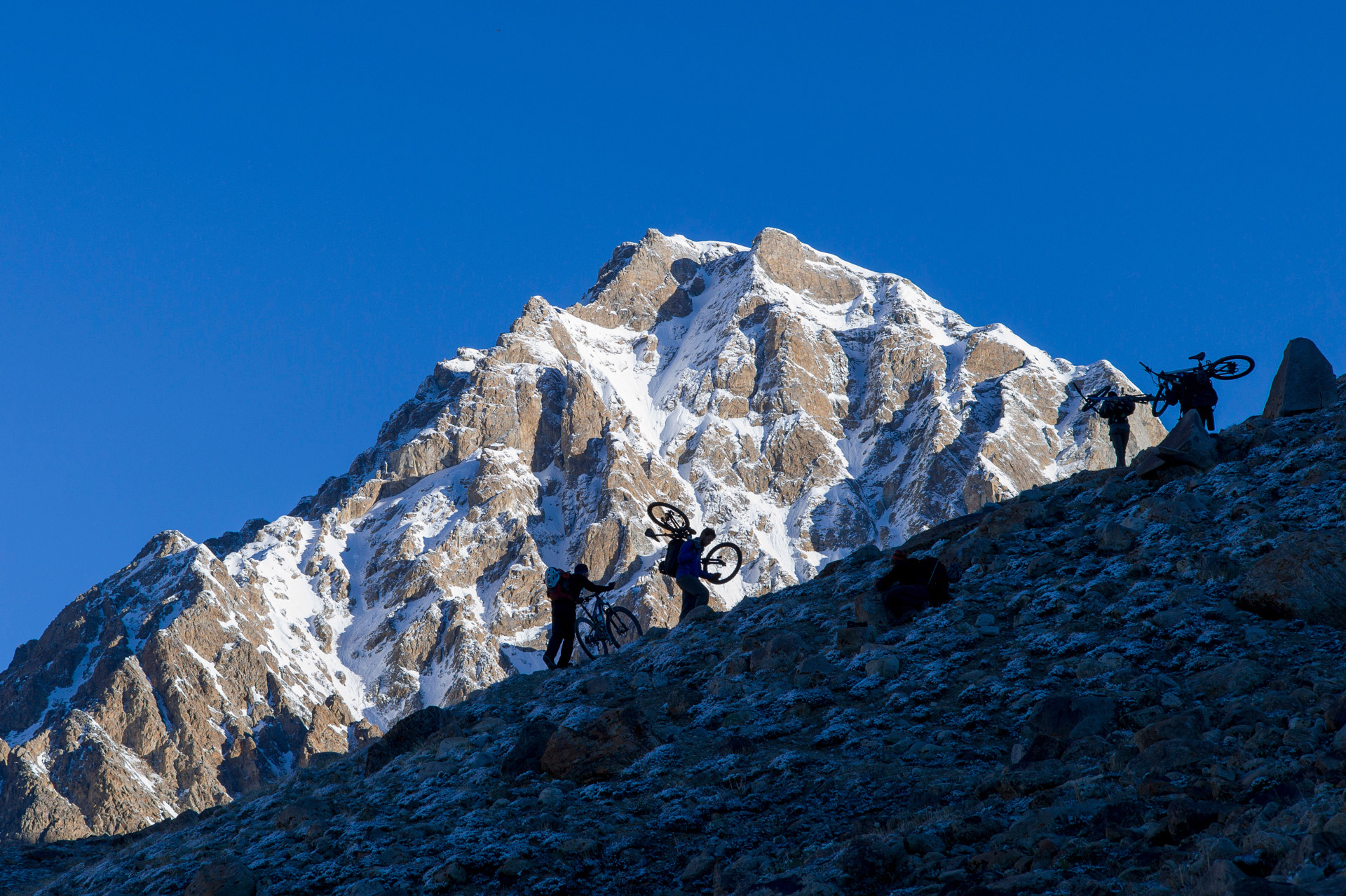 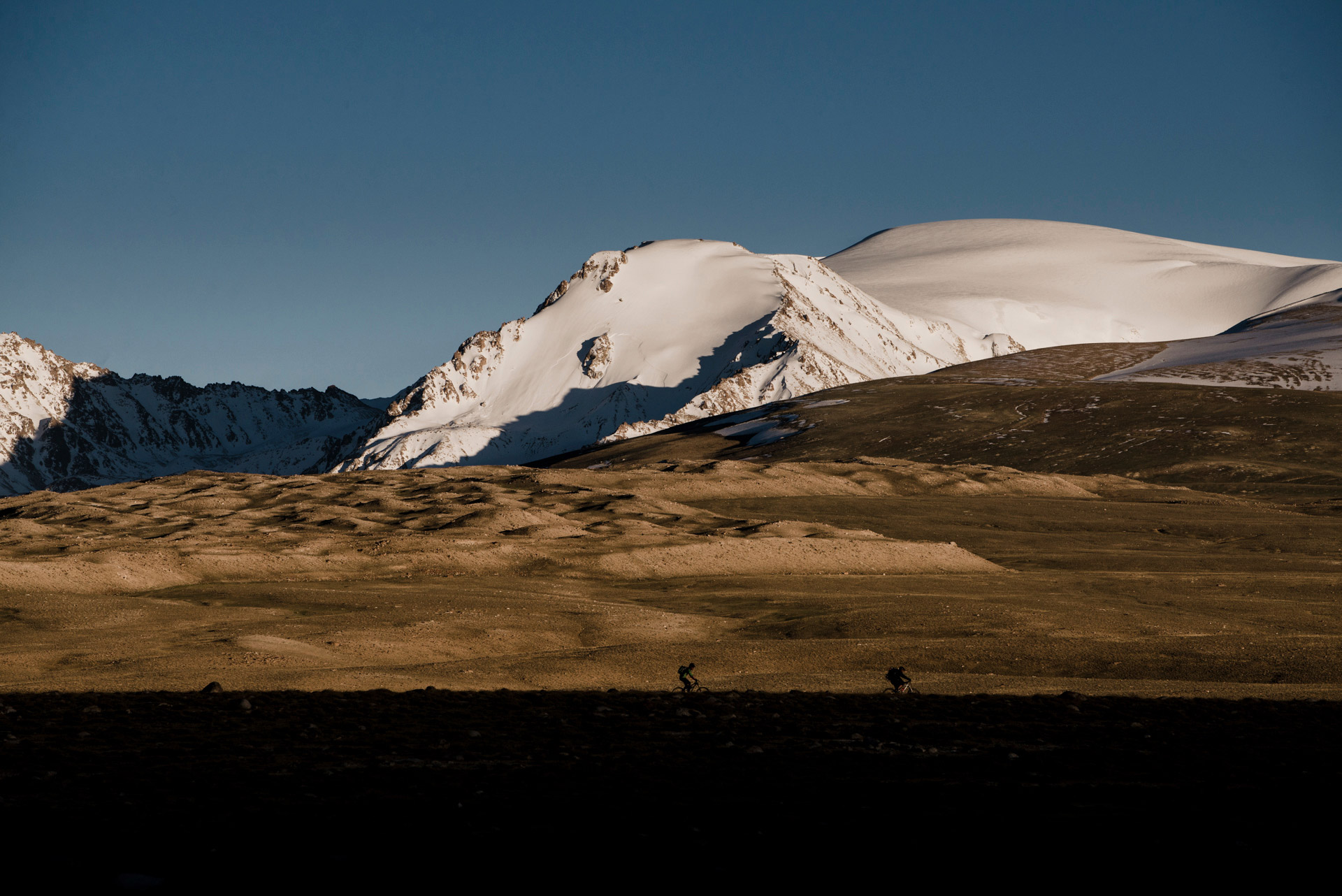 We drop into a wide glaciated valley, and we roll through it dwarfed by the scale our surroundings. For the next two nights we are welcomed into traditional Kyrgyz yurts and sleep alongside the six Afghans we have in tow. Protected from the incessant wind, the rug-adorned yurts are a high point for all. We are as captivated by yurt life as the Kyrgyz are by our bikes hauling. They laugh when we struggle to down the rancid, sour yak yoghurt that accompanies our tea. 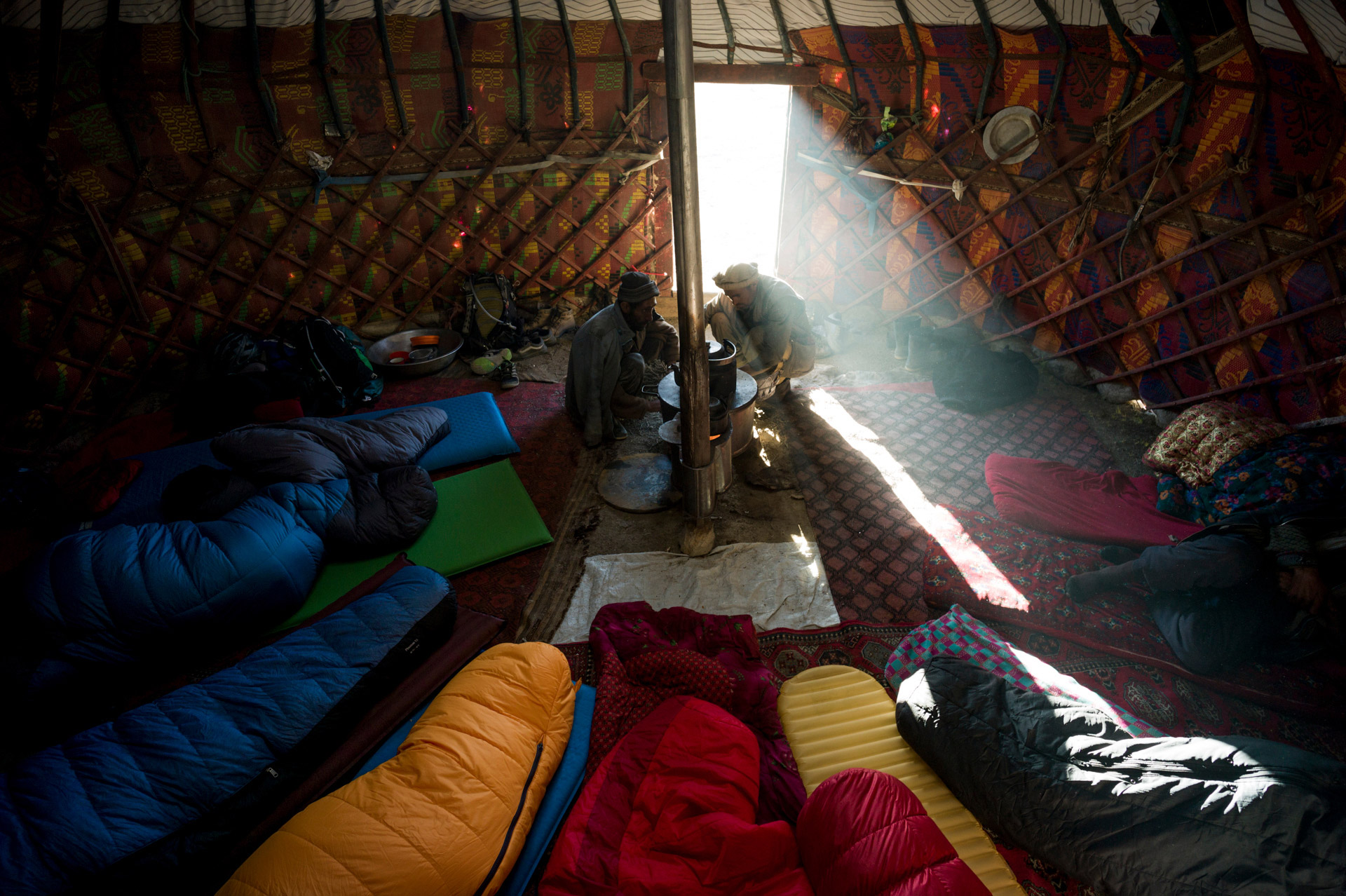 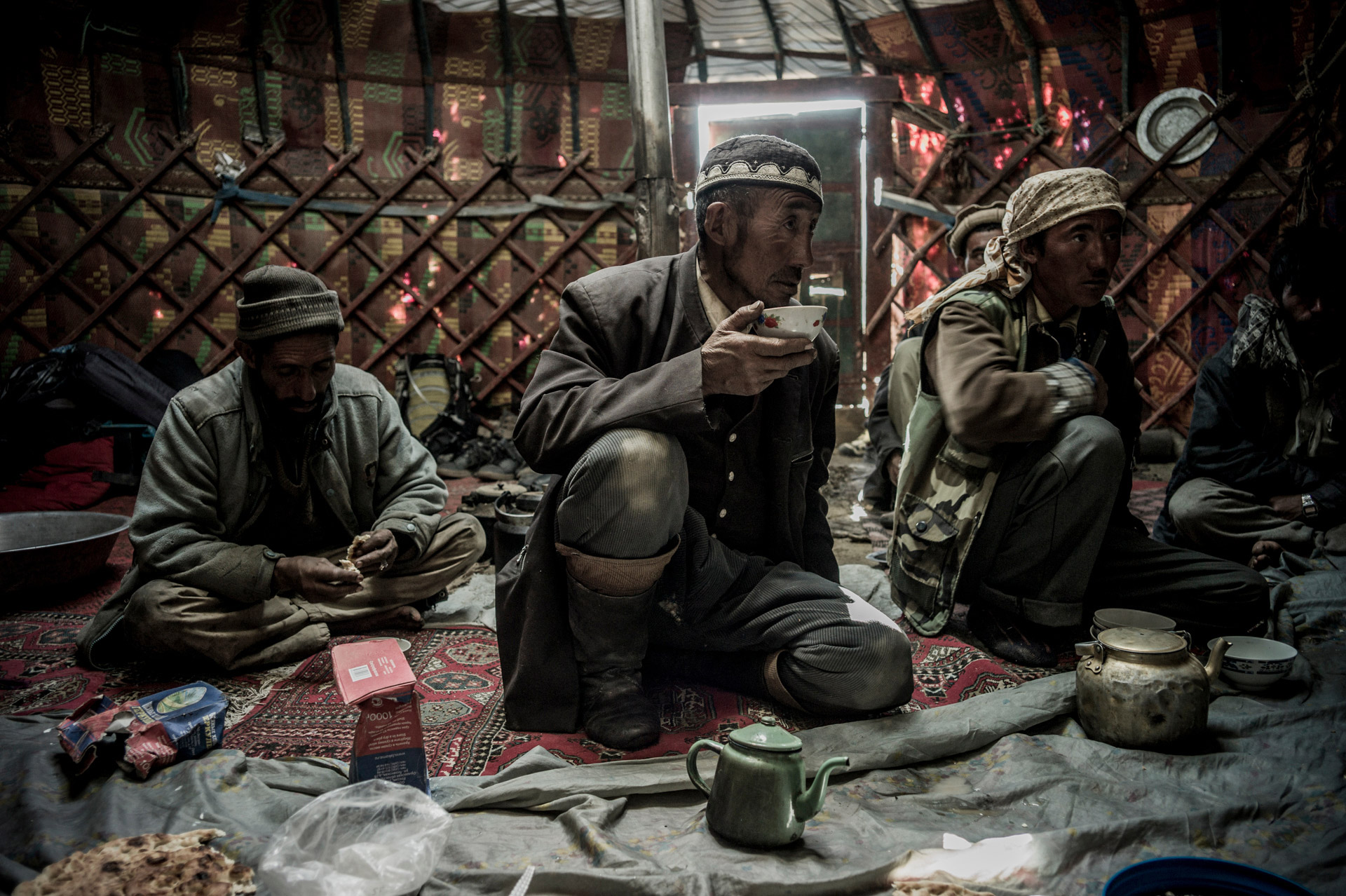 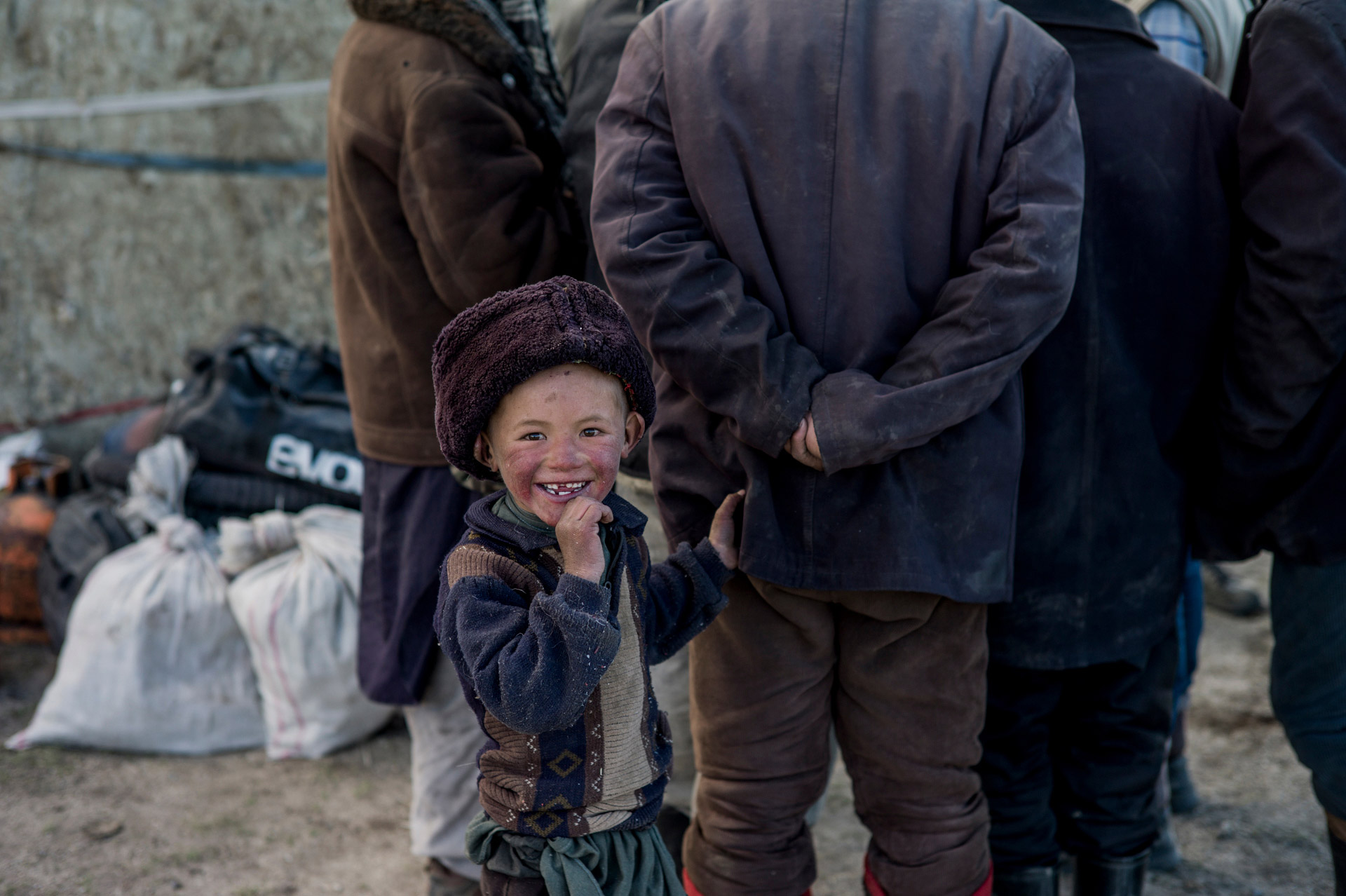 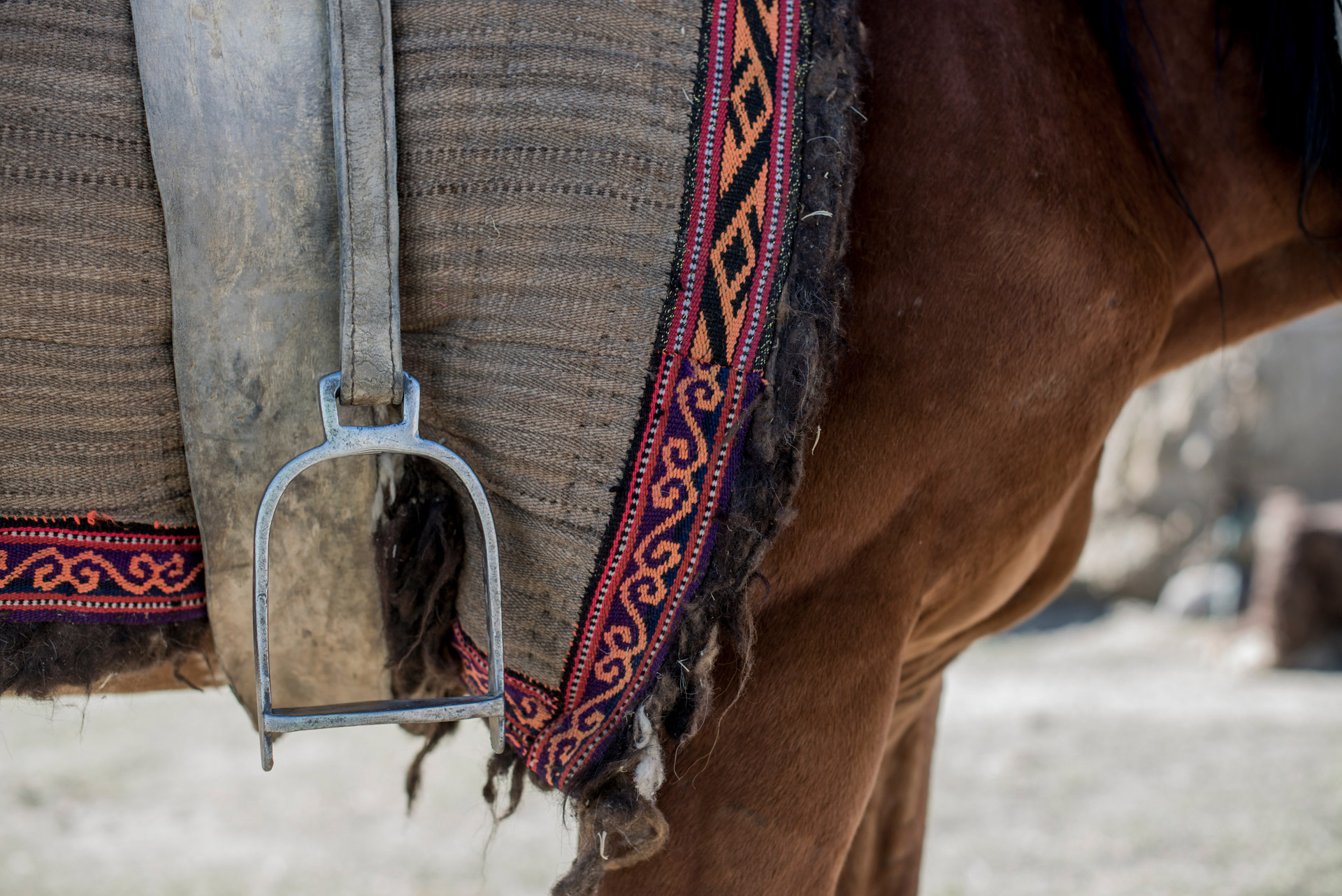 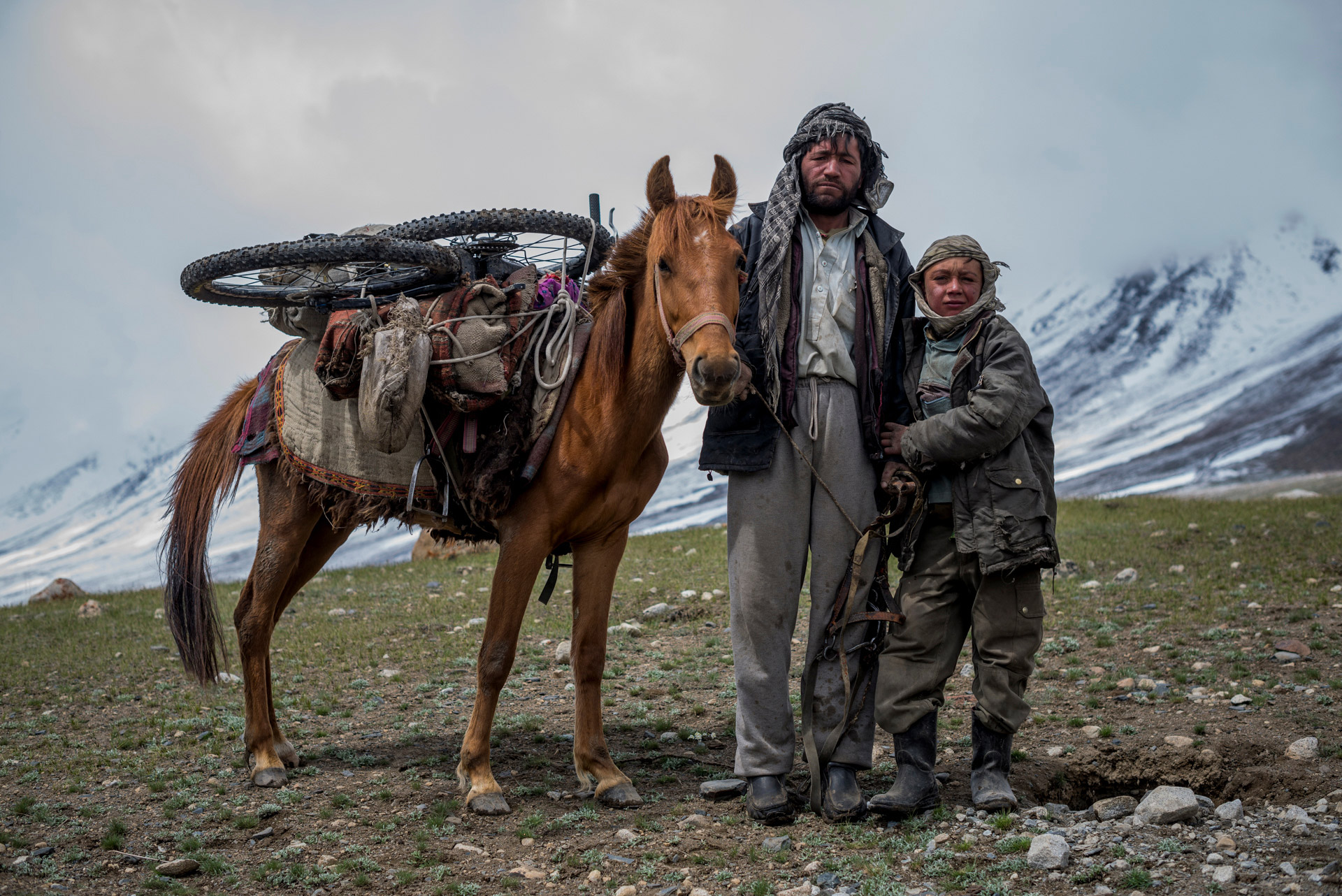 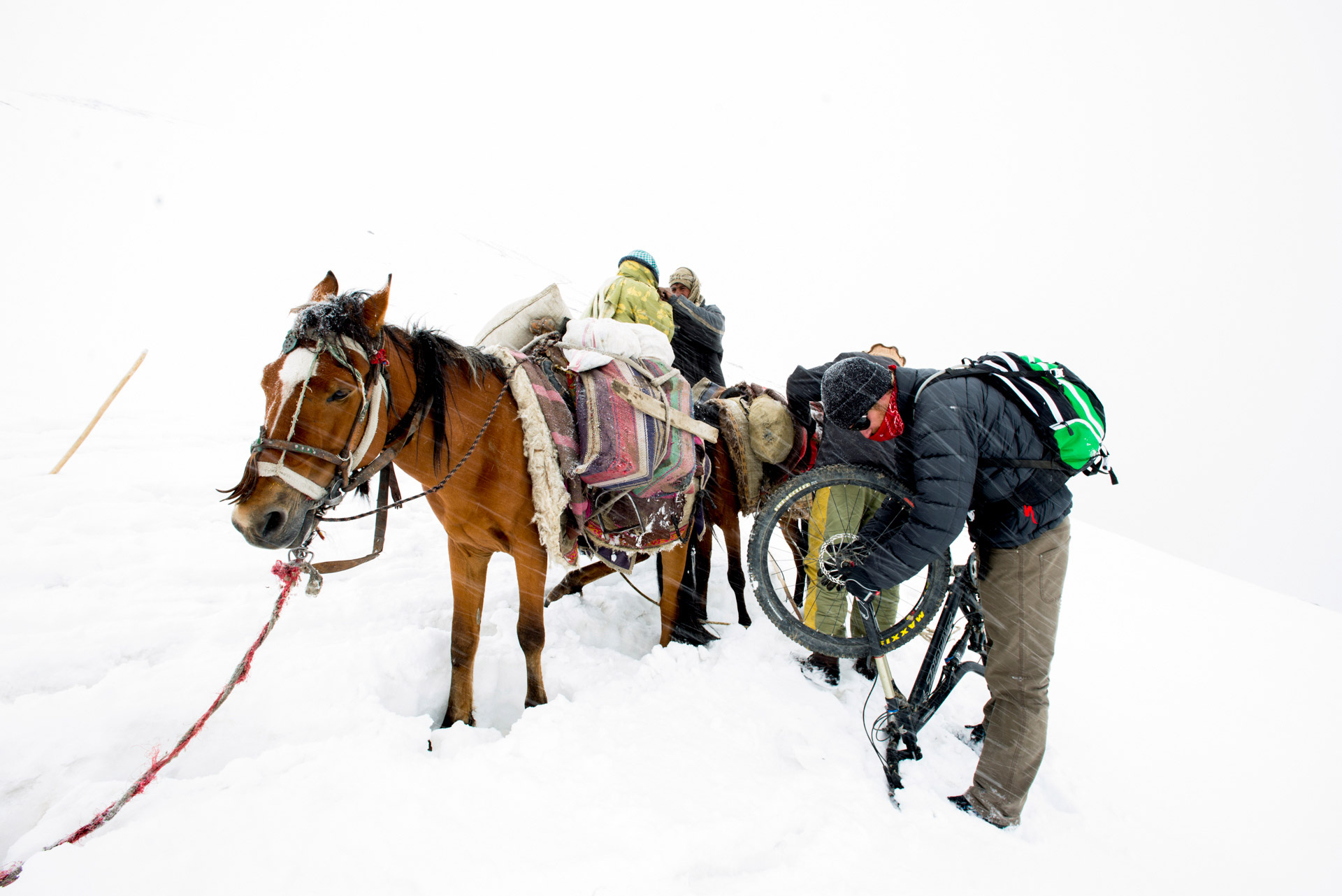 The Kyrgyz are the masters of horsemanship. Here horses and yaks are the only way mode of transport; bikes never made an appearance. As we descend the valleys, working our way back out of the big Pamir, our bikes become the objects of fascination. Some would think it crass that we are riding machines worth more than a local could earn in a decade, but their value has no meaning here. All that matters is that it has wheels and looks fun to try to ride. It’s apparent that the kids here have never held a wheel, let alone try to ride a bike. The wonder that is the wheel is something that illuminates a dozen faces as Matt hands round his spare XTRs to a handful of local kids. They spin them, laughing. 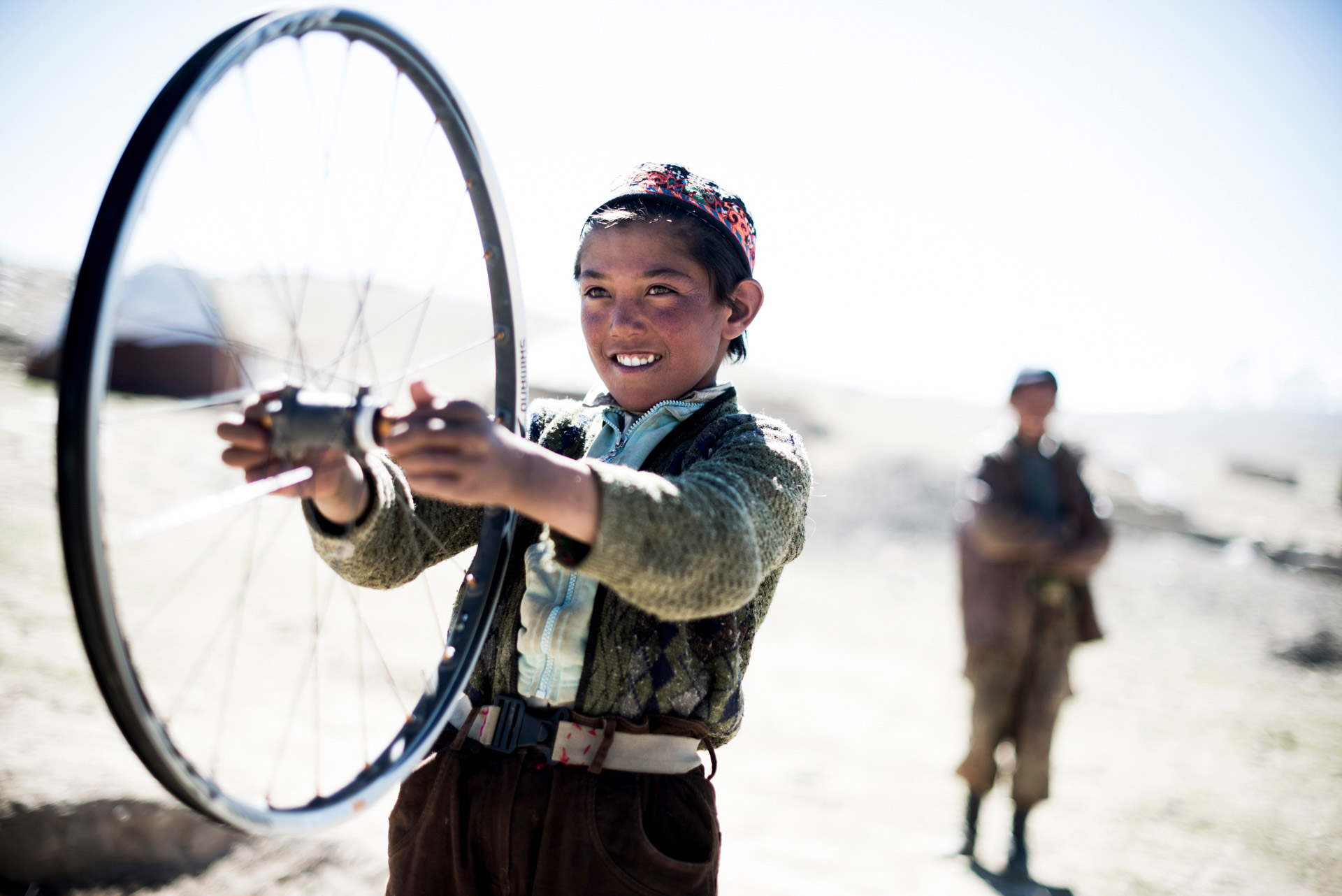 After 11 days the routine of ride, wade, eat, sleep has become our lives. Hygiene has gone by the wayside, the rivers too cold for anything more than a token dip, and despite the daily challenge of covering distance, of climbing snowy passes or riding rocky, technical singletrack, life has become simple.

As I push my bike across another traverse too cluttered with fist sized rocks to ride, I remind myself of this. The frustration of pushing a bike is something I have become accustomed to. In a few days time I’ll be boarding a plane bound for the luxuries of Europe. I can’t pretend that I’m not excited about the prospect of a real bed, or turning on a tap to have drinkable water run freely from it. But at the same time I know I will never repeat what we are doing now, I will never have those same exact experiences again. And so for the moment I smile, revelling in the traffic jam of experiences that are clogging my senses right now. It’s the hardest thing I’ve ever done, but I love it. In this wild, harsh corner of the World I realise I am between a rock and a hard place. Literally.

Close Menu
The bell Suscribe to our newsletter